My love of hot dogs is well documented, mainly here, and I have been looking forward to this post for a very long time.

We went down the street to the Charlotte Street hotel for drinks first which I always love.  The room is big enough so you don't feel claustrophobic and has a great crowd.  house white wine was £8/glass though so beware.

Then we moved to the main event!  We were shown to our table(s) near the back right away.  They asked if they could seat another two with us, which I awkwardly said no to because it was my birthday party and it would have been like having two complete strangers hanging out with us.

Then came the exploration of the menu.  They (as advertised) have loads of champers and hot dogs to choose from which posed a very serious problem for me.  We wanted to order our champagne first, because it was taking ages for hot dog decisions, but the waiter was nowhere to be seen.  In fact, it took over half an hour for us to get our champagne. 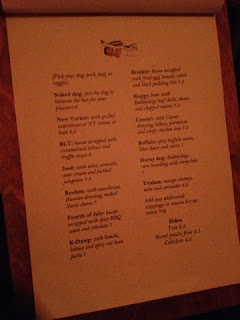 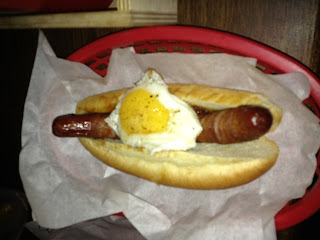 All of my favorite things together!

Turns out, getting everything you've ever wanted all at once isn't as awesome as it sounds.  I love breakfast food and I love hot  dogs so in theory i should love a breakfast hot dog.  In truth, the idea of it is far better than the execution.  For all the dogs you have a choice of beef, pork or veggie and I decided on beef for all of mine because I felt a pork hot dog wrapped in more pork was a bit much.  But because there is so much going on in this one you couldn't really taste anything individually.  Like putting all your favorite paint colors together and getting a brown sludge.  Not my favorite   Don't get me wrong though, I still ate the whole thing. 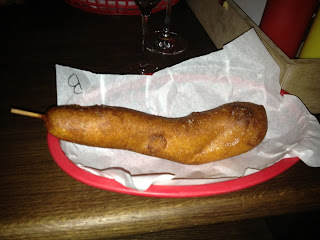 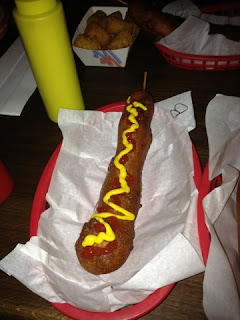 My friends ordered a variety of things (veggie and pork as well).  Here are pictures of those things.  The girls all seemed very pleased with their meals. 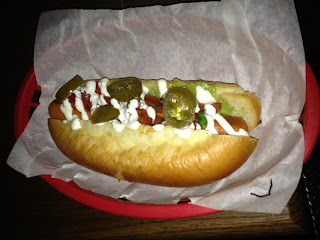 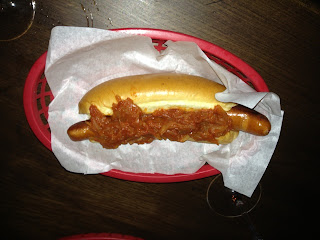 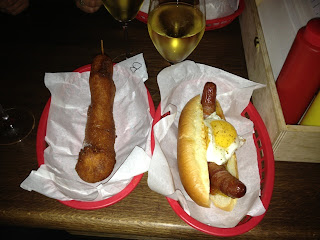 Mine again (getting acquainted with the champagne washing them down)

You can also order tater tots which are these little hasbrown-y things I used to eat almost daily as a kid.  They are awesome. 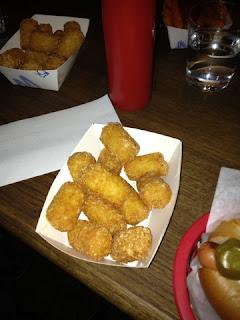 So all in all, The service wasn't amazing, but we did have a very good time. 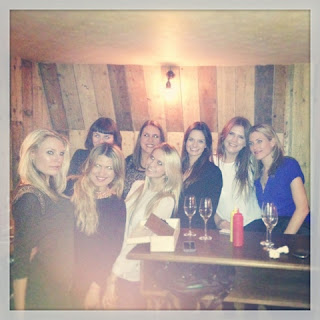 I would recommend booking a group of 6 or more, otherwise you'll be waiting in line for a few hours.  Their phones are only open for reservations 9:30am - 11am Tuesday to Saturday.  Not the most convenient  but you can also book through this email: info@bubbledogs.co.uk.  Not instant, but they do get back to you relatively soon. 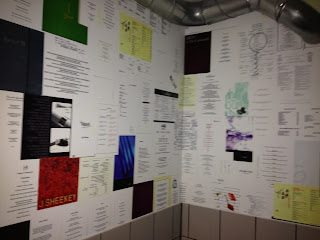 One other cool thing was that the bathroom walls are papered with posh restaurant menus like Nobu, Hedon (DON'T order the pigeon there... it comes with FEET attached), Noma and the fancy NY restaurant Per Se.  I asked the waiter about it and apparently it's places the head chef has liked or worked at.  In fact he once worked at Per Se.  Now he makes posh hot dogs. I would prefer the latter as well.