The Cinnamon Club was massively disappointing.  Highlights included paying £30/person for Butter Chicken, made with anorexic chicken legs and completely forgetting to bring out one of our mains. But lets start at the beginning...

My husband had chosen to go there to celebrate his birthday and I was looking forward to it.  I’m not actually a huge fan of Indian food, but he introduced me to our local Noor Jahan, which has amazing butter chicken, so when he wanted to go to The Cinnamon Club, I was excited.

I arrived, told the reception it was my husband’s birthday and sat in the bar area which was overly lit with florescent lights.  I was told I was the first in our party to arrive and after I ordered my Cosmo (there are no vodka based cocktails on their menu) I waited ages.  Turns out my mother in law had in fact arrived before me and was waiting at the table.  She eventually found me along with my husband and my drink still hadn’t arrived.

We moved into the dining room which has better lighting and looks like a library. We brought our drinks (which by then had thankfully shown up, and were very good) to the table and I discreetly told the waitress it was my husband’s birthday and we would like some kind of cake with candles at the end. 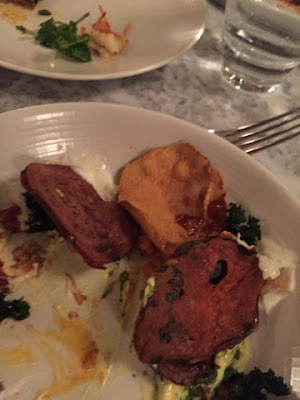 (Sorry for the mid bite pic! I was so hungry!)

Our starters came out quickly.  I had the crisp spinach, which was like spinach tempura and potato chips.  It wasn’t the best choice.  My husband had the lamb escalope which was the best out of everything we ordered and my MIL had the lobster which was also fairly tasty. 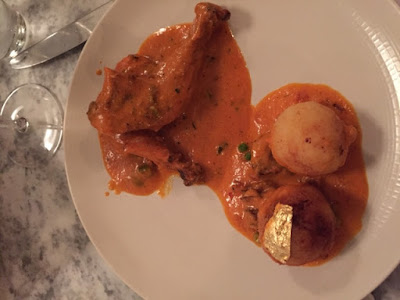 Then came the disaster of a main course.  I was really looking forward to this expensive butter chicken.  There was gold leaf on the potato balls, and I think that’s where the cost came from, because they certainly didn’t splurge for actual chicken, just the leftover spindly legs.  There was no meat on them.  So I filled up on rice and naan. I had also ordered the roast cauliflower.  That never showed up and we were so disappointed with the chicken, we decided not to bother asking for it. 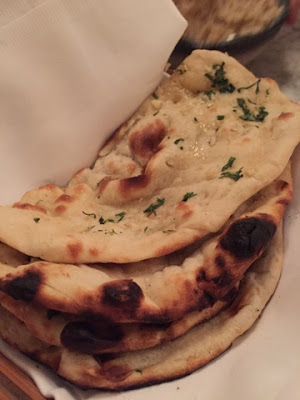 The banana tarte I had for dessert was okay.  What wasn’t okay was when my MIL went to the bathroom and the waitress came out and asked us when we would like the cake and candle for her birthday… in front of my husband. Face palm.  I told her of the faux pas and she brought it out anyway for him, quite anticlimactically. 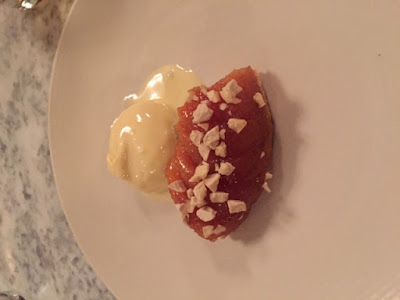 Bit sad, isn't it? Dessert isn't supposed to be sad.

If you want to risk it (and bring a wad of cash):
The Cinnamon Club
The Old Westminster Library
30-32 Great Smith Street
London
SW1P 3BU
www.cinnamonclub.com